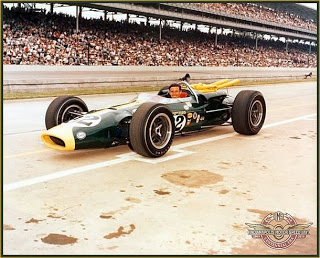 
What a gorgeous car and what a terrific driver Jim Clark was. What a revolution took place at Indy when the Lotus (and Cooper Climax before it) came to the Speedway.

Change and innovation were not exactly hallmarks of Indy at the time and but none so rapidly ushered change as when the little Lotus was driven to victory lane in 1965.  The car had already become an sensation for its innovative design, but had yet to prove itself by winning.  The likeable Scotsman, Jimmy Clark, had crossed the Atlantic with his Formula 1 constructor and Lotus founder Graham Chapman in 1963, winning in only his third try.

With the dominance of the rear-engined, small, lightweight chassis, the days of the classic and venerable Watson roadster chassis were all but done.  Some lamented the change brought about by the foreigners from ‘across the pond’, but the change became the new standard, bringing about a revolution in thought, design, and competition to the Indy 500.