Without deigning to delve into Detroit’s drenched driving debacle, this week’s post will focus on the update to my Greatest 33, post-2015 Indy 500. If you recall the post prior to the race, I pondered how this might change depending on who won, lead laps, and finished in the top 5. Change it did.

After a few very minor tweaks to the formula prior to the 2015 Indy 500, I had reconciled the slight discrepancy in weight of winning versus the other statistics I use to rate the drivers. It had a very slight effect in that by increasing the value of a win and a pole by approximately 10%, relative to everything else, and decreased a top 5 finish by 20%, winning is as important a criteria as ever. Some drivers who’ve enjoyed more success in winning poles, received a slight upgrade, versus those who may have won but perhaps lead fewer laps, or managed a top 5 for example.

As you may recall, I also have my own “Last Row Party” made famous by the Indianapolis Press Club Foundation members for the rather dubious honor of starting in the last row.  My last row is a specially designated place for the three best ever to have never won. Essentially, I have a Greatest 30, plus three with careers of significance, but lacking that final turn into victory lane.

Found as the cover photo on @groundedeffects Twitter, here is my Greatest 33 following the 2015 Indy 500 results:

Here’s a closer look by groups of Rows… 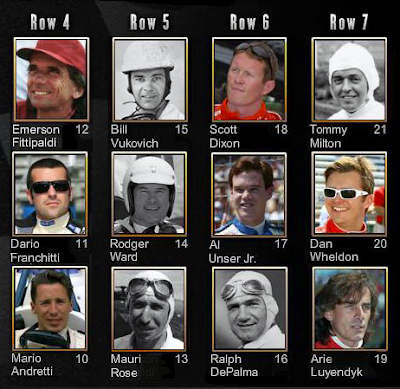 Rows 4 – 7: With the slight change in scoring Franchitti gains one spot over Fittipaldi by virtue of an additional win, but still so very close overall (4 points or 00.31%) . Bill Vukovich also gained a spot over DePalma and yet another difference so slight (11 points/01.16%) it’s almost a crime either gets the nod over the other. Scott Dixon won a pole, led many laps and gained another top 5 finish. If Dixon had won, we’d be looking at him moving into Row 4 between Mario and Dario. Aside from Montoya, ‘the Iceman’ made the most gains in places (4) from inside Row 8 to outside Row 6.

Rows 8 – 10: Dixon’s upgrade sent Parnelli back into Row 8 and in another quirk of numbers, he also lost a spot to Kanaan who leads by a nearly infinitesimal 3 points (or 00.32%) difference. Assuming Kanaan races in another 500, he will likely surpass Milton, and move out of this group into Row 7. Landing in this group from outside the Greatest 33 is the biggest mover overall and this year’s winner, Juan Pablo Montoya. From a non-descript spot among single-winners, JPM vaults up 21 spots into inside Row 9. Jim Clark also loses 3 very closely contested spots with Bill Holland, Billy Arnold, and Jim Rathmann gaining a spot by virtue of the formula modification.

Montoya’s promotion also relegates another driver from the list. Did you notice who it was? Unfortunately for his cadre of fans, the bespectacled and thickly-mustachioed Bobby Rahal drops from the list into the great beyond. Perhaps Rahal the Younger will avenge his family’s name and appear once or twice himself.
Row 11: Unchanged although it is worthy to note that Marco Andretti is the highest rated active, non-winning driver currently. Barring a win, Marco could very likely unseat Rex Mays with just two or three more top 5 finishes or leading another 140 laps. Would two Andrettis cruelly book-ending the futility of the final row be something the racing gods intended?

And my current criteria for selecting these drivers:

Several active drivers were added to my list as they all stand a chance of being part of the conversation should they win a 500. Among the remaining active drivers, Hunter-Reay and Marco are the two leading active candidates who could possibly bump their way into the Greatest 33 grid, the rest will need more than a win to get close to making the top 30.

It’s also noteworthy that at this point, two wins basically solidifies you into the Greatest 33, putting Hunter-Reay in the “first alternate” position. One-timers Mario, DePalma, Dixon, Kanaan, Parnelli, and Sneva all seem to be quite solidly in for the time being. There are more single-win drivers (48) that of all other multiples combined (19),a nd only 10 have made the list, so to be a single-winner and make the Greatest 33, requires an outstanding career.
Let me know what you think about the latest legacy of The Greatest 33..