Skip to content
“There are things known,
and things unknown,
and in between
are the doors of perception”
– Aldous Huxley
With a relatively late-in-the-day 4-hour drive home from the Milwaukee Mile Sunday night, and my fully-tired 11-year-old son asleep in the co-pilot’s seat, I had some extended solitude with which to consider my very enjoyable weekend in West Allis, Wisconsin.
Typically, I’ll stay off Twitter while at a race because I am a big advocate of simply filling your senses with the many inputs received during a race.  This beautiful Sunday, however, tweeting while watching the racing as moments allowed, came much more easily than in other recent events (Indy 500). While doing so, following others’ comments via twitter confirmed for me my belief that the intake of the product in-person and for those not on-site is different and that those differences are quite marked.  I also noted that even at various locations in this relatively small venue, the experience is different.
Reflecting during my drive I was left with many positives over those 36 hours, but also two crucial items that I believe strongly Indycar must concern themselves with: what the product is and how to best manage its perception (or reception). Since I’ve already written about the existential ennui of Indycar multiple times, I’m going to take aim at how it’s perceived.
During practice and qualifying, I took a seat near the end of the front straight in the front row, just 15 feet away from the cars at speed. 179 mph trap speeds at a range of 15 feet or less is close to mind-blowing, and especially so when watching them negotiate a seemingly-impossible 180-degree, flat-arc change of direction over the next five seconds.
Much as you have, I’ve seen in-car camera views of them going upwards of 235 mph, but being in-person and so close, even at 180, is the best way to really sense how fast they’re going. For the race, my seats were near the same point of the straight but within 3 rows of the top. Huge difference in perception! 50′ above and approximately 75′ away from those cars (see pic – P = Practice, R = Race). The cars look fairly fast yet fairly benign from that location. 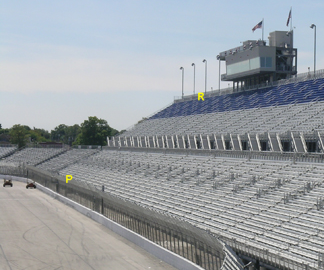 Imagine going from standing on a sidewalk proximity to a 7th floor window view across a four-lane street. Sure the overall view is better, it simply isn’t the same experience in any regard.  I’ve always been an advocate of sitting as closely as possible as it seems in direct correlation with how amazing the sensation of the cars speed is.
Herein lies my point – Indycar MUST be able to give as many fans as possible this experience. Even if not everyone could sit in Row 1 and see them speeding by, to have this in practice gives a new perspective on just how fast these cars are, even at “just 180 mph”.
The perception that the racing isn’t very thrilling unless masses of cars are heaped on top of each other goes away quite rapidly when you see just one of these cars ripping by you that closely at speed. You can quite easily see the difficulty of their proposition and to then consider a tightly bunched pack is, in fact, lunacy.
Getting more fans closer access needs to be a priority even in the age of moving fans farther away from the danger. It’s imperative that the fan see just how amazing these cars are and as closely as possible. Finding a way to also get that sensation communicated via a camera to a remote viewer is a challenge even-bigger although the in-car cameras begin to approach it. 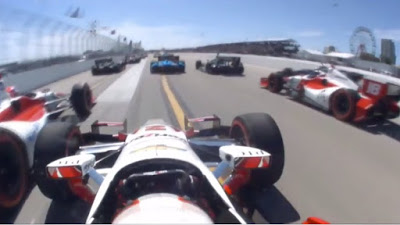 I’ve yet to see the TV coverage from this weekend but I’m sure I’ll be quite amazed at how poorly the sensation of speed comes across. Other forms of racing may be suited for the types of camera angles we’ve seen for decades, but Indycar would do itself much credit to develop an entirely new way of receiving the product for those not in attendance and also figuring out a way to emphasize how being in-person is the best way to see it.
I can’t even remember how many times I’ve said, “TV doesn’t do it justice”.  Perhaps no other sport I’ve attended reflects this sentiment quite as much.
Blow up the decades-old methods of visually presenting Indycars at speed from high above and a wide-angles.
Give us a view and a sensation that is totally unique and amazing.


Editor’s Note: I’ll have some continuing thoughts on this subject as a guest blogger over at Oilpressure.com tomorrow for the Brainstorming Series.

One thought on “Perception Is Everything”