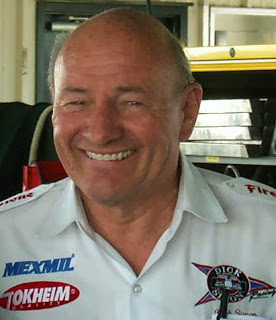 Seems funny to say it out loud since in some ways he was but a blip in the statistics of Indianapolis 500 Mile Sweepstakes compared to the legends whose tales we so frequently regale.

A racer who never really threatened to win at Indy, and so much so that he was the subject of a spoof song by radio personalities Bob and Tom back in 1987. The female singer laments drawing his name (or ‘pulling Dick’ per the lyric) in the Indy 500 office pool every year.

When I look back, however, I have to consider him very underrated both as a driver and car owner. Written in 1994, this article by Jim Murray reminds us of how it used to be and also how time has a way of allowing us to forget some of the more “un-Penske-like” everyman racers who appeared each year on the grounds of IMS.

Often driving in ‘second-tier’ equipment, he showed up every year to contest Indy, largely because he loved it so and because, in his words, “It is the most visible championship in all of sport”. ‘Effervescent’ and ‘never-say-die’ are words that seem associated with him frequently, his annual also-ran status notwithstanding. Such is the passion that so many who have wrenched, raced, or even just watched experience but perhaps none so much as an owner than Dick Simon who, in 1994, had a record SIX cars in the race. His top qualifier Raul Boesel finished fourth under two questionable stop-and-go penalties that kept him from winning.

A favored interview as a car owner because of his passion for Indy, perhaps none captured better than by Gary Gerould on Pit Road in 1993 (advance to the 5:55 mark of the video, or just watch the whole classic build-up) moments after the the traditional build-up and command had been given and the cars begin to pull away…

Some minor internet research would indicate you signed the 100th anniversary Marmon Wasp Dallara last summer and your thoughts are still with Indy now and again.

Cheers to you and yours Mr. Dick Simon, racer. I hope to see you again one day in May, making your way around IMS somewhere if only to shake your hand and say ‘thank you’ for reminding us all how special it is ‘just’ to be at Indy.