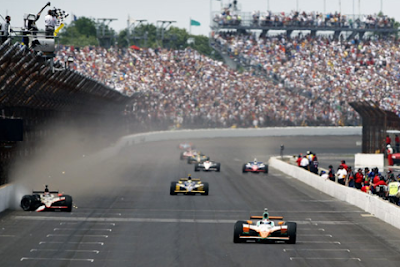 As the cloud of excitement and ethanol and rubber and sunburn fades into memory, I can say without question that the 2011 Indy 500 was among the best 10% of races.  The last 35 laps were nothing short of classic sporting drama and, as Steph at More Front Wing so eloquently stated, without the information fed by a scanner or TV coverage, one never knew where all the players stood with regard to fuel, speed, and handling which made the closing laps all the more exciting to watch from the stands and every few laps of the closing 15 presented a new leader.

I must admit to feeling fairly clairvoyant with regard to the race winner predictions 6 days prior to the race. I then noted a predilection for the winner to be from a one-off team overcoming the day’s dominance of team Target (who would befall some late-race misfortune) and win his second Indy 500 ring…  Sound vaguely familiar?  Where the prediction misses the mark is which one-off driver would win. I had Buddy Rice but history would show Dan Wheldon to be that driver in Victory Circle.
My Top 10 was a bit off, but still the overall theme was nearly right on. As for the weekend and raceday enjoyment, it was nearly unparalleled in the 24 different races I’ve been (’79, ’80, ’88-’96, ’99-current).  Definitely in the Top 5 of races I’ve witnessed first-hand with 1992, 1979 (my first), 2006, and 1989.
Time will tell just how important this race was, but with the fantastic weather, pomp and circumstance on ’11’, complete stadium silence at Taps, our good friend Mister Jim Nabors, exciting racing with a finish to be long-remembered, it certainly has all the hallmarks of one of the greats.
We can also take a deep breath, and begin to look forward.
Only 360 days to the Indy 500…