So so SOOOO often I get asked by my friends (who aren’t yet Indycar fans) what are seemingly elementary questions about Indycars and the Indy 500. Things like, “Indycar… what exactly is that? Is that like NASCAR?” or, “Whaddya mean by open wheels?” or, “Isn’t the Indy 500 just a big party? You go every year right? (implying that I can’t pass on a big party which, while fairly accurate, in this case is missing the point).


It forces me into a frame of reference that I haven’t been since roughly the turn of the decade – the 80s decade, that is, when I first began approaching Indycar as a fan.

I also must resist rapidly morphing into some aghast, codger-like visage of Houseman’s Professor Kingsfield from “The Paper Chase” (a quote from which this post’s title is paraphrased) and try to see Indycar through fresh eyes. My sometimes inquisitive kids also aid in this.


One thing I’ve noted is that we Indycar stalwarts (are there any other kind?) can be perceived as a very insulated, exclusive, micro-focused bunch approaching racing nerddom.  So when I get that seemingly elementary question from an Indycar ‘Outsider’, I must remember that it’s all-new to someone and I will try hard to determine what depth of answer will lose them and develop an answer just short of that, because my goal has always been to maintain their interest in Indycar, no matter how shallow, and provide as informative an answer as possible.


But also, after years of losing many people with amateur answers that regale the history and intricacies and dramas of Indycar, I have now determined one simple answer seems to to be about the only true and best advice I can give anyone who wants to know more about Indycar: 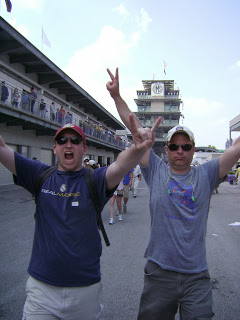 It’s still my favorite way (by far) to experience it. TV rarely does the experience justice, the great crew with IMS Radio at the Indy 500 does a great job of communicating the excitement, but when I’m fortunate enough to be present when they fire up the engines, it’s still a goosebump moment… everytime. Anticipation, sights, sounds, smells, vibrations through the ground all culminate in one overwhelming experience and the closer you are, the more amazing it is.


So do yourself a favor. Go see a race and don’t fail to take a friend who has never seen an Indycar race before. I’ve done it now for 8 years running to the Indy 500 and while, to an Indycar codger like me, it may seem their auto racing brain is full of mush, they also may just leave a fan.

2 thoughts on “"…you come in here with a skull full of mush and, if you survive, will leave thinking like an Indycar fan."”